This post is about a project I did during my funemployment. Read more about it here: http://andrewtorkbaker.com/funemployment 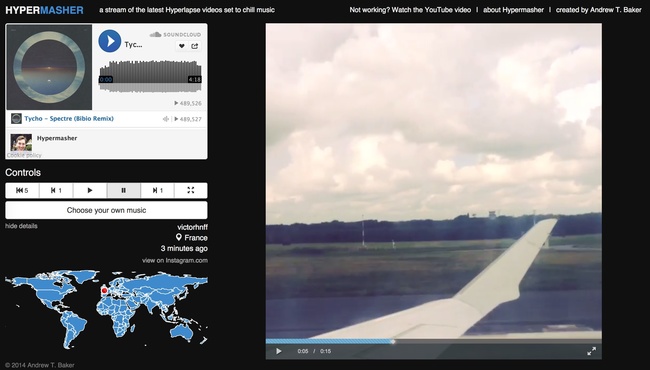 When I first considered becoming “funemployed” to expand my development skills, there was one tech at the top of my list: Node.js. I had been curious about Node for a while, and after a couple tutorials I was ready to dig in and build a project with it.

Around the same time, Instagram released Hyperlapse, a new iOS app that helps you make stabilized time-lapse videos easily. I was playing around with it at home and joked to my girlfriend that it would be funny to put a bunch of Hyperlapse videos to dubstep music. Thankfully, she persuaded me to try something gentler.

A couple weeks later Hypermasher was ready for the world. Check it out for yourself: www.hypermasher.com.

Hypermasher uses the Instagram and SoundCloud APIs to pull in a continuous stream of #hyperlapse videos from Instagram and set them to a SoundCloud playlist of your choosing. The default is one I made based on the artist Tycho.

Once I had the MVP of this app working locally, I knew I was onto something more than a joke project. At most times of day, there are just about enough new #hyperlapse videos posted publicly on Instagram to sustain a close-to-live stream of videos. The result is an unexpectedly captivating glance into the lives of people all around the world.

I had originally planned to somehow filter the stream of videos - either by additional hashtags or how many likes a video had. As I watched the site while I developed it, however, I decided to focus on the global and live-like elements of the experience instead. So I added some light reverse-geocoding and a simple global map.

When I decided to send Hypermasher out to the world, I didn’t have high expectations. It was a learning project and, while it turned out to be a more interesting product than I expected, it’s not very technically complex. I posted Hypermasher to Hacker News on the off chance it would garner some feedback from someone wasting time on the “Show HN” page.

I was surprised when my post made it to the front page, but even more surprised at the overwhelming positive feedback in the comments. The Internet can be a harsh place, so it was reassuring that most people viewed my product the same way I did: a unexpected, chill glimpse into life around the world right now. 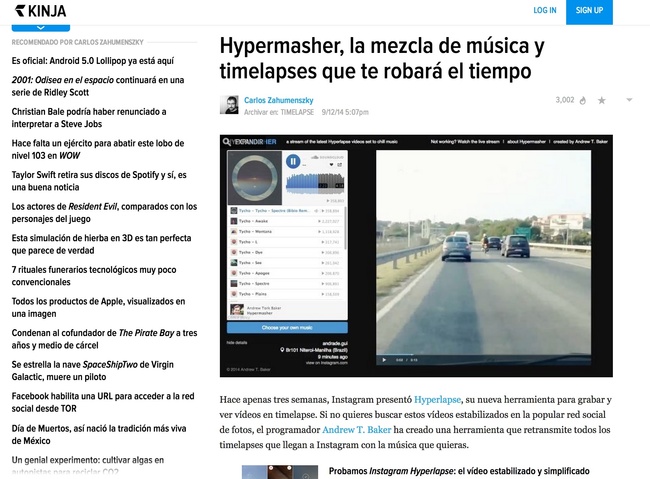 Please also sent lots of love my way on Twitter:

In total, over 12,000 people visited Hypermasher in its first two weeks. Needless to say, the launch exceeded my wildest expectations.

After launch day I built a few more features into Hypermasher but quickly shifted focus to my next project (coming soon!). I am grateful for the opportunity to present Hypermasher at the DC Hack and Tell meetup and for the code reviews Josh Finnie and Paolo del Mundo gave me at a Node DC hack night.

As of today, Hypermasher is open source under the Apache 2.0 license. Running Hypermasher yourself is pretty easy - just check out the README in the repository: https://github.com/atbaker/hypermasher.

Oh, and if you ever get tired of the soothing melodies of Tycho, you can always check out the original concept for Hypermasher here.

I have been hooked on Fog Creek’s Trello ever since @htammaro turned me on to it about a year ago. Trello won me over initially with its intuitive UI and easy setup, but I have become an advocate of the tool for one simple reason: most... Continue →